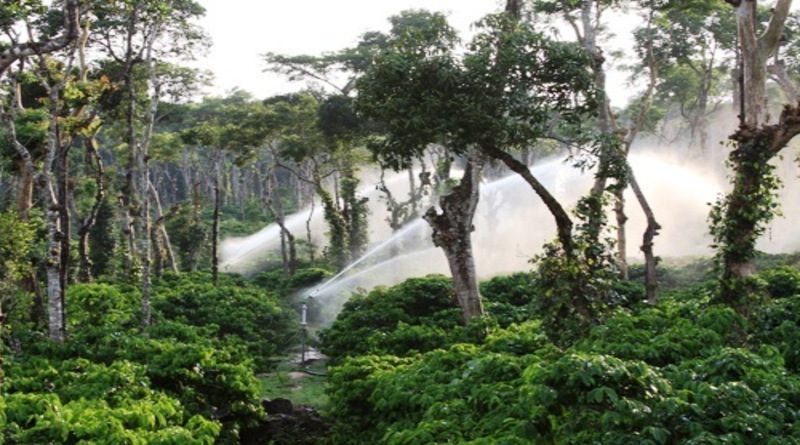 The British Pioneers in India introduced two main species of coffee, viz, Coffee arabica (ARABICA) and Coffea caneophara (ROBUSTA) in the Western Ghat range, known for its unique biodiversity in terms of both plant and animal life. In the early years, Due to the forest factor, the rainfall pattern inside the coffee mountain was predictable and uniformly spread over a period of 5 to 6 months. In simple terms, the moisture requirement of the coffee farms was adequately met from time to time depending on the needs of the farm.

The early coffee plantations also, enjoyed well defined wet and dry seasons resulting in the luxuriant growth of coffee together with the multiple crops. This could be attributed to a peaceful co existence of various biotic partners within the coffee mountain. Coffee farmers and the surrounding biotic community lived with a close bond respecting each others needs. Today, all that is history. The rain cycle has changed markedly and the coffee farms, exposed to the vagaries of nature.

Water plays a critical role in the biochemical and physiological activities of the coffee bush. All life inside the coffee mountain is linked to the cycle of water.

In the early years of coffee planting, the area under Arabica cultivation was significantly higher than the robusta’s, accounting for more than 80%. But, in later years due to uncontrollable pest and disease incidence in Arabica plantations, the area drastically reduced.

Today, out of a total area of approximately 3,50,536 hectares, Arabica accounts for 45% and Robusta accounts for 55%. India grows almost 3% of the world’s coffee and more than 80% of the produce is exported, contributing thousands of crores of rupees of foreign exchange.

In the past two decades, due to the very high incidence of white stem borer and leaf rust a majority of the coffee farmers converted their Arabica farms into Robusta farms, without taking into account the irrigation requirements of Robusta. Robusta invariably requires pre blossom showers, Blossom showers and Post blossom showers at regular timely intervals and any deviation from the norm will drastically affect the yield and productivity of the farm. Among the Robusta’s and Arabica’s, the Arabica’s are more drought tolerant and can withstand drought up to the end of April. Robusta’s are more sensitive to moisture stress and respond very well to irrigation.

The irrigation requirement for robusta is very high. For irrigating one acre of coffee Up to a depth of one-inch (one acre inch) 22,660 gallons of water is required.

Coffee belts are synonymous with heavy rainfall regions. The coffee belts receive from a modest 30 inches of rainfall per annum to a high of 250 inches each year. This acts as a precursor for the growth of not only coffee but an incredible variety of flora and fauna because of the temperature differentials. The temperatures vary from humid to moderately dry. The inherent nature of coffee is that it is a shade loving shrub and in turn acts as a host and lodge for a number of microscopic forms of life. It is this uniqueness that gives a special taste to Indian coffee.

COFFEE AS A COMMERCIAL CROP

After the British left India, new plantations mushroomed along the length and breadth of the western Ghat habitat, in areas which were dry, barren and open. More over, coffee gained ground as a commercial crop and played a significant role in providing much needed foreign exchange during the early part of this century.

In later years, Due to this commercialization, and overexploitation of forests, forest grown, shade loving Indian coffee took a severe beating because of the unfavorable weather patterns. The coffee farmer was a mute spectator to either excess of rainfall or long periods of drought. Added to the, uncertainty of rains, was the introduction of coffee varieties, which responded to artificial sprinkler irrigation. Steadily, but gradually, coffee farmers began experimenting with sprinkler irrigation and came out with a number of observations.

WHY THE NEED FOR IRRIGATION

Unlike many other coffee producing Nations where rainfall is scattered throughout the year, a few countries including India are governed by a definite rainfall pattern spread over a period of 4 to 6 months. This type of rainfall is commonly referred to as the SINGLE RAINFALL REGIME (SRR). Under the SRR the coffee bush is subjected to a drought period of 4 to 5 months.

Hence, Coffee growing Countries like Vietnam, Africa, and India depend on artificial irrigation to boost productivity. However in Countries like South America and Central America irrigation is not required because the rainfall pattern is distributed through out the year with no specific wet or dry periods.

Mitchell, (1988) has carried out extensive work on the critical period for irrigating coffee. They are as follows: 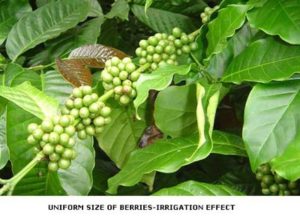 The major coffee growing belts in India are situated in South India and the coffee farmers invariably rely on the South west monsoon for the rainfall. More than 75 % of the total rainfall is received in the months of June, July, August and September. Then the North East monsoon takes over resulting in a few sporadic showers in the months of October and November.

In the technical sense, with predictable rainfall patterns, the coffee farms have adequate moisture up to mid November and thereafter the moisture stress sets in. This moisture stress may be extended up to May end resulting in a prolonged drought period of six months. Delayed showers (Pre, Blossom & Post Blossom) results in partial to complete failure of the crop. Adequate soil moisture is continuously required for the growth, development, and maturity and ripening of the existing crop.

This data enables us to understand the water requirements of the bush. More importantly, it throws light on the fact that excess of irrigation is detrimental to the plant. Secondly, providing irrigation, when the bush does not require it, will lead to a physiological imbalance in the flowering of coffee. 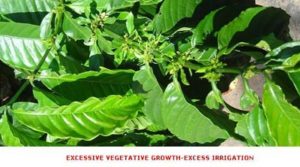 Coffee cultivation to a small extent is also confined to the hilly tracts of the Eastern Ghats. These areas predominantly receive the North East monsoon during the months of October and December. However, most of the coffee grown in these regions are the Arabicas and need no irrigation.

To be continued in next article here..

[1]. The Fine Art of Irrigation in Robusta Coffee Plantations

Black Pepper Cultivation – Calendar of Operations from June to July 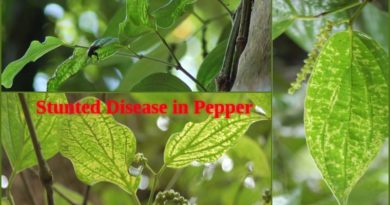 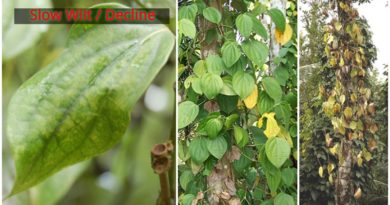 GAP – Effects and management of Slow decline in pepper

One thought on “Importance of Irrigation in Robusta Coffee Plantations”